The Georgia Brass Band was conceived by co-founders Joe Johnson and Christopher Priest in the spring of 1999 over lunch at a Chinese restaurant. While lamenting the absence of a regular brass band in the area they simply decided to form one. Some notes were jotted down on a napkin and a string of phone calls to friends and colleagues ensued. Just a few weeks later, the band met for the first time. 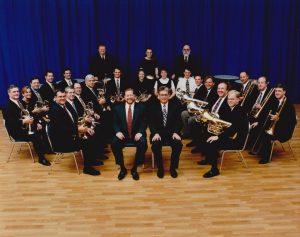 The GBB performed its first concert in September of that year and has maintained a very busy schedule ever since.

Although the personnel has changed considerably over the years, several of the original players are still in the group today, having been completely bitten by the “Brass Band Bug.” Band members are selected by audition or invitation and include some of the finest musicians in the Atlanta area. All members and staff volunteer their time and talents to the organization; In fact, members pay annual dues just to be a part or the experience. A number of our members have gone on to prominent performing or teaching positions throughout the country.

The band’s repertoire is quite diverse and ranges from the Renaissance and Baroque to the 21st century. Our library is full of marches, sacred arrangements, popular music, jazz tunes, movie themes, and classical transcriptions. Additionally we perform a number of challenging concert selections and contest items written specifically for brass band. The band’s versatile combination of instruments can produce a variety of tonal colors, allowing it to sound at home in nearly any style of music.

In April, 2006 the band travelled to Louisville, KY, for its first ever appearance in the annual North American Brass Band Association (NABBA) Championships. The band’s performance earned it First Place in the “Challenge Section” and drew accolades and rave reviews from all present. The correspondent from 4barsrest.com, England’s leading brass band website, noted that, “One of the highlights of the contest had to be the debut of the Georgia Brass Band.  Whilst we knew they had some fine players and a good music director, we had no idea they would be as dominating as they were.”   Doug Yeo, then editor of NABBA’s Brass Band Bridge, reported that “…the Georgia Brass Band roared into Robinson Theater with an outstanding and commanding performance…establishing itself right away as a major force in the North American brass banding world.”

Never content to rest on its laurels, the band returned to Louisville for the 2007 Championships and moved up a class to compete in the “Honors Section.” The band gave a strong performance of Rodney Newton’s “The King of Elfland’s Daughter” and Eric Ball’s “Resurgam.” Again, the band’s performance earned plaudits from many people and the GBB walked away with the Second Place trophy.

Buoyed by the near-miss in 2007, the band returned to Honors in 2008. Eric Ball was again on the docket, as his classic “Journey Into Freedom” was chosen as the test piece. The band paired this with Philip Sparke’s demanding “Endeavour” and gave a strong performance that earned it First Place in the Honors Section.

Competing against other North American brass bands is definitely a fun diversion for the band, but the Georgia Brass Band exists first and foremost to offer both its members and its local audiences a quality musical experience. That said, the band also like to take to the road and has performed in Tennessee, North Carolina, Kentucky, Indiana, Massachusetts, and Vermont. The band has also been prominently featured in a number of festivals and conferences, including the Georgia Music Educators Association Conference, the Southeast Regional Tuba/Euphonium Convention, the US Army Tuba/Euphonium Conference, the International Euphonium Institute, the Atlanta Trumpet Festival, the Trumpet Festival of the Southeast, the International Trumpet Guild Conference, the International Trombone Festival, the Deep South Brass band festival, and the Great American Brass Band Festival. Other notable performances have taken place at the Rialto Center for the Performing Arts, the Woodruff Center for the Performing Arts, the Schwartz Center for the Performing Arts, Perimeter College, Berry College, Oglethorpe University, Reinhardt University, Georgia State University, Kennesaw State University, University of Georgia, the Georgia World Congress Center, and Centennial Olympic Park.

The Georgia Brass Band has also helped increase amount of literature written specifically for Brass Bands.  In 2010 – in a nod to its 10th season – the band commissioned acclaimed composer Stephen Bulla to compose Decade Celebration, a rollicking piece based on a prominent “G-B-B” motif. Canadian composer David Marlatt also penned a brass band version of Temple in the Clouds specifically for the band.

A Christmas Festival
Also in 2010 – in August – the band spent a sweltering weekend recording its first commercially-available compact disk, A Christmas Festival.  Comprised of 19 Christmas favorites performed as only a brass band can deliver them, the CD is available for purchase at the link above.

We hope you’ve enjoyed this trip through the history of the Georgia Brass Band, and we look forward to entertaining brass band lovers for many more years to come.